Last July, while the quasi-religious fever of a then imminent football ‘homecoming’ swept the country, sociology of religion scholars from all over the UK (and indeed the world) gathered at the University of Strathclyde in Glasgow for a homecoming of their own. The Sociology or Religion Study Group of the BSA was once more reunited, this time to discuss the relationship between religion and education. What follows is an account of what for me, a newcomer to this exciting collegiate environment, are but a few of the highlights from the gathering. 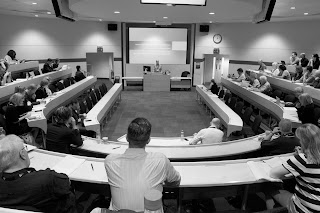 The conference had a great start with Yvette Taylor as the keynote speaker of the first plenary session. Taylor’s presentation on queer religious youth in different schools in the UK was very relevant both theoretically and methodologically, with a call for intersectionality in the study of religious groups. Taylor’s findings from her research of queer religious youth in both faith and community schools pointed towards a ‘multi-faceted’ experience of queer youth in both of these spaces, much more varied than common representations of such experience tend to be. Taylor argued that heteronormativity and gender binarism are strong aspects of the school experience itself, which makes it necessary to take a step back from religion as the main variable associated with the difficulties of queer youth experiences. In a similar manner, the proclivity of research to over-emphasise the ‘queerness’ of these group, she argued, tends to obscure how their religious identities and practices can function as forms of support to them.
The conversation in this regard continued with Seán Henry’s panel paper on queer temporalities in faith schools. Particularly thought provoking was Henry’s argument that the temporality of the educational process can, in itself, be of an intrinsically queer nature, as it rejects a reproductive determinism: a linear process that always renders the same result. Thus, he suggested, education can be seen as de facto at odds with heteronormativity. This, in conjunction with the attentiveness to the surrounding world, and the mystical connections with it upon which faith operates, gives faith schools a particular potentiality to dissociate from heteronormative hegemonies.
Anna Strhan posed a very relevant question during her keynote plenary presentation related to children’s agency: how can it be seriously accounted for within the sociological study of religion? Strhan’s work built upon David Oswell’s ideas of children less as ‘beings’ and more as ‘doings’, and the notion that children’s ability for doing has expanded in late-modernity. Drawing on data generated in her fieldwork with charismatic evangelical groups in the UK, Strhan showed how religion is one of those areas in which children’s capacity for ‘doing’, can be seen as a dynamic convergence of various elements, which bestows different degrees of agency on them. These degrees go from the regarding of children as passive subjects, more prevalent among self-identified conservative evangelicals, to ideas of children as agents with a purpose. Therefore, they should be seen not only as capable but even as responsible for discovering and making sense of the world around them on their own, with the help of appropriate theological tools.
Strhan’s argument rang particularly relevant with Yaron Schwartz’ panel paper on the endeavour to teach ‘new masculinity’ to religious teenage boys. Schwartz argued that traditional religious education in Israel, where he is working towards making gender equality ever more prevalent in the curricula of an all-boys secondary school, has traditionally seen boys as passive individuals. They are also seen as in need of protection from the risks of criticism to ‘traditional’ models deemed as quintessentially masculine, such as the Jewish religious leader or the Israeli soldier. Schwartz’ gender responsive pedagogy seeks to address this issue by viewing religious boys (whether Jewish or Muslim) as agents for the potential transformation in Israel of masculinities that are seen as negative or conflictive.
Just as children’s religious beliefs and practices were present, so was older adult’s unbelief addressed at the conference. Joanna Malone’s paper derived from her PhD project which investigates life histories of older nonbelieving adults’. She seeks to establish connections between their unbelief and specific life events, and explores the significance and expression of their nonbelieving in everyday life. Her project does this with the goal of starting to ascertain the role that non-religious adults may or may not be playing in the transmission of such worldviews to younger generations, and the extent to which this should be occupying space in the research of unbelief.
Malone’s is one of many examples of exciting and fascinating research being conducted on religion and its relation to education, in a very sociological (even Durkheimian) sense of the concept: an intergenerational, multidimensional phenomenon, with empirically verifiable impacts today. I look forward to coming home to some more of this great sociology of religion research next year in Cardiff.
Ali Siles
Ali Siles graduated from Sociology at the Metropolitan Autonomous University in Mexico City, and holds a Master’s degree in Social Science research, from the Latin American Faculty of Social Sciences. He is currently a Graduate Teaching Assistant, and a PhD candidate in the Sociology department at the University of Manchester, researching the construction and experience of religious masculinities among Mormons in Mexico City. His academic interests include religion and religiosity, especially in connection and interaction with gender, masculinities, and everyday life.